For about as long as I can recall, I’ve been a big fan of Technos Japan. The DOUBLE DRAGON and KUNIO-KUN games were absolute favourites of mine in formative years, and almost certainly a big reason why I’m still very much fond of beat ’em ups. Although not every Technos and Technos-related game over the years has been of the highest quality, I’ll always have the utmost respect and admiration for the company and their games for their innovation, creativity and sheer personality.

Like many game companies from the 80’s, Technos eventually went under, even if some of the same people, brands and games stayed active in one form or another. As of 2015, The Technos brand and associated IP is owned by Arc System Works, who – so far – seem to be doing a commendable job keeping the spirit of Technos alive with quality re-releases and even brand new KUNIO-KUN games, among other things.

But perhaps the most delightful thing about Technos’s newest incarnation is how it seems to maintain one of the things that fascinate me the most about the company: their unusually relaxed handling of their IP.

Although less noteworthy back in the 80’s when loads of Japanese video game developers and publishers would license out their games to European microcomputer companies without much oversight, Technos never seemed to ever really tighten up their grip around their properties. In an age where the media landscape is dominated by risk-averse bets on known quantities, and rights holders dictate in the finest detail how their brand is to be depicted – lest a low-quality product sully the brand – the Technos “a mere moderate amount of fucks given” approach truly is a breath of fresh air.

Technos was never the biggest company, nor a household name on the level of SEGA, Namco, Capcom or Konami, but they had a very big impact on video games in the 80’s nonetheless. 1986’s NEKKETSU KOUHA KUNIO-KUN essentially birthed the “beat ’em up” action game – and with the massive success of its followup DOUBLE DRAGON in 1987, the genre had all but taken over the torch previously held by space shoot ’em ups as the king of arcades. A prestigious spot held until Capcom’s STREET FIGHTER II (itself a followup to their seminal 1989 beat ’em up FINAL FIGHT) ushered in the era of VS fighting games in 1991.

NEKKETSU KOUHA KUNIO-KUN – or more accurately its localised-for-the-west overseas equivalent, RENEGADE, received several ports for various home consoles and computers. As was standard at the time, different companies would be granted the license to develop and/or publish ports of a game for various platforms and markets. As such, there were a lot of different versions of RENEGADE. 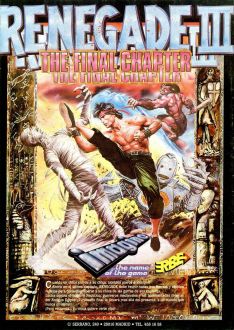 Imagine, the publisher of several computer ports of RENEGADE would then go on to develop their own – fully licensed – yet wholly original sequels; TARGET: RENEGADE, and RENEGADE III: THE FINAL CHAPTER. A game about Japanese juvenile delinquents was turned into a game about 50’s greasers, which then got a sequel with a more contemporary street gang setting, and then in the third game you, uh… travel through time to fight mummies, robots and medieval knights. Go figure.

Far from an anomalous blip on an otherwise cohesive timeline, these wild RENEGADE offshoots were kind of a taste of things to come. Not necessarily in the time-travelling, mummy-fighting sense (though that does happen again in DOUBLE DRAGON 3), but moreso in that future Technos games would end up in really bizarre places, all somehow completely official and above-board.

This trend is undoubtedly best exemplified by the vast legacy of DOUBLE DRAGON. The followup to NEKKETSU KOUHA KUNIO-KUN traded its Japanese high school setting for a violence-ridden post-apocalyptic North America inspired by Walter Hill’s 1979 cult classic THE WARRIORS, and was a smash hit worldwide.

Almost immediately DOUBLE DRAGON established a pretty relaxed attitude towards canon and continuity. Technos licensed out most home ports to other companies, but their own internally-developed Famicom/NES port is the one that perhaps deviates from the arcade original the most, not just introducing new mechanics but also making hero Billy Lee’s brother Jimmy – the 2nd player character in the arcade game – a surprise final boss!

DOUBLE DRAGON II: THE REVENGE essentially follows up the plot of the original, with brothers Billy and Jimmy taking their titular revenge on the Black Warriors for killing Billy’s girlfriend Marian, and it’s about the closest the series ever gets to any kind of sequential continuity. DOUBLE DRAGON 3: THE ROSETTA STONE was not developed by Technos but rather outsourced to East Corporation, perhaps explaining its outlandish premise: Billy and Jimmy (now joined by a whole crew of additional playable characters) travel the world and/or time, fighting samurai, Roman centurions, mummies and eventually Cleopatra, in order to… achieve magical powers to resurrect Marian? Shit gets weird.

In any case, whether in games or in other media, whether developed by Technos or not, every other subsequent instalment DOUBLE DRAGON made pretty much no attempts at fitting into an established timeline or continuity. Instead, you’d find common characters, themes, and concepts; a loose adherence to the idea of DOUBLE DRAGON, interpreted through all kinds of different lenses.

The Marvel Comics adaptation of DOUBLE DRAGON infamously establishes that Billy and Jimmy are the sons of Stan Lee. Uh, sure.

You’ve got the brothers Billy and Jimmy Lee, using martial arts to fight bad guys in an urban, possibly post-apocalyptic setting. Usually they’re fighting the Black Warriors, but not always. There’s usually a Marian, bad guys may or may not include Abobo, Linda, Burnov, and possibly Williams and Roper. But the rest (and even some of the aforementioned details) is completely malleable. There isn’t really a DOUBLE DRAGON canon, there aren’t really any rules for what makes a version of DOUBLE DRAGON “faithful” or not; it’s really all up to the interpretation of whoever is making their particular version. And I think that’s super cool!

I suppose having comic, cartoon or film adaptations take the bare minimum of recognisable iconography and making new shit up to fill in the blanks would be more or less par for the course at the time – though it is telling of DOUBLE DRAGON’s popularity that it’s in the company of properties like SUPER MARIO BROS. and STREET FIGHTER in getting such treatment in ’93-94. And it actually predates them both in crossing over with other video game properties – in 1993 Rare developed BATTLETOADS & DOUBLE DRAGON: THE ULTIMATE TEAM for Tradewest, publisher of both series in North America at the time.

Similar to STREET FIGHTER’s live action movie-based games, DOUBLE DRAGON had a video game tie-in to its cartoon TV series; western developers Leland even went so far as to label it as a numbered sequel – DOUBLE DRAGON V: THE SHADOW FALLS – despite zero continuity with the previous games (also despite there technically not being a DOUBLE DRAGON IV until 2017). In 1995 Technos themselves made an arcade VS fighting game ostensibly based on the live-action film; the game features the movie’s original antagonist Koga Shuko as the final boss, as well as a few details like Abobo hulking up and the Lee brothers’ sequined karate uniform henshin forms – but otherwise its character roster and art style bears no resemblance to its source material. 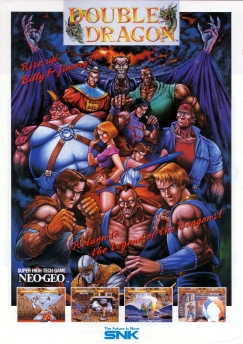 Though the series lay dormant for a few years following the closure of Technos Japan in 1996, much like Technos itself DOUBLE DRAGON seems to come back in some new form or another every once in a while. In 2003 Million Corp (a holding company founded by former Technos staff) made DOUBLE DRAGON ADVANCE, essentially a remake of the arcade original with a massively fleshed out move set plus new enemies and stages (arguably the best game in the entire series). There were a number of DOUBLE DRAGON releases for mobile phones, both emulation/direct ports as well as complete remakes. There’s even a unique DOUBLE DRAGON game exclusive to the Brazilian mobile phone-based home console Zeebo. As far as more original takes on the property, Korean MMO developer Gravity threw their hat in the ring with DOUBLE DRAGON II: WANDER OF THE DRAGONS (arguably one of the worst games in the series). Perhaps most well-known in recent years, WayForward did their ironic 80’s throwback version DOUBLE DRAGON NEON. And most recently, a small group of original Technos staff members got together under the new Arc System Works stewardship to make their faux-retro styled DOUBLE DRAGON IV.

I could spend all day going over all individual differences and idiosyncrasies of all these different versions, but the specifics are really beside the point. What I want to get at is how weirdly and wonderfully varied all these versions of DOUBLE DRAGON have been over the years. Although it would still be a greatly influential and important series of games even if had ended with those three original arcade games (or first two, frankly), the very fact that it grew into this uniquely malleable concept is really my favourite thing about it.

As a fan, it makes it easy to not really worry or concern myself so much about which parts of the “canon” matter or not; I can latch onto the parts I like, I can safely ignore the rest. I can – and have – picture what my ideal DOUBLE DRAGON would look like, and it’s a lot easier to frame it as “this is what kind of game I would make” rather than “this is what I wish these games would’ve been”. And I can get excited wondering what the inevitable next instalment is going to look like, with the only safe assumption being that it could be just about anything and it’s impossible to really predict what. And how cool is that?

It’s obviously not hard to understand why more media properties are not treated like this. Though it’s perhaps difficult to prove either way that Technos would have been more or less financially successful if they’d more closely guarded their IP, it’s simultaneously tough to imagine properties like, say, the aforementioned SUPER MARIO BROS. or STREET FIGHTER benefiting from a looser leash. I mean, the few examples we do have, such as Philips’ CD-I exclusive HOTEL MARIO and Incredible Technologies’ arcade STREET FIGHTER THE MOVIE, certainly appear to justify Nintendo and Capcom never lending their precious IP again.

From a creative point of view though, it’s so refreshing to be able to have all these different perspectives, and I really wish we’d see more of it! And since it seems quite unlikely to ever really catch on as a trend (nor does it seem likely that the entertainment industry itself will ever make any moves to relax copyright law) I think it’s really important to cherish companies like Technos allowing – and seemingly embracing – this broad range of interpretations! And on that note, it’s really terrific to see this tradition alive and well even in the company’s latest incarnation.

So far the only DOUBLE DRAGON game to be released since Arc System Work’s acquisition of the brand was the fairly conservative DOUBLE DRAGON IV, but just last year the WayForward-developed KUNIO-KUN spinoff RIVER CITY GIRLS came from pretty much out of nowhere. Hell, the dust barely had time to settle before Arc System Works announced and released yet another spinoff; STAY COOL, KOBAYASHI-SAN! And even as recently as a month or so ago it was announced that the WWF WRESTLEFEST-inspired RETROMANIA WRESTLING had been granted the license from Technos turning it from “spiritual successor” to a full-on official WRESTLEFEST sequel!

Who’d have thought that the 21st century would’ve been such a good time to be a Technos fan – let alone the 2020’s? With Arc System Works putting out more original Technos-related games than ever, a new DOUBLE DRAGON seems inevitable. Whenever its time arrives, I for one am super excited too see what form it’ll take. ✌

One thought on “Thoughts on Double Dragon, Technos Japan, and a liberal approach to intellectual property”