With the 2019 retrospective behind us, let’s look forward to 2020. I actually ended up doing a surprisingly decent job of at least trying out almost all of my most-anticipated games of last year (though let’s ignore all the 2016-2018 games still sitting untouched on my shelves) – hopefully we can keep that trend up in 2020! On that note, what games am I actually looking forward to playing this year? Let’s find out!

DOOM ETERNAL. Does anything more really need to be said? DOOM 2016 was a tremendous reinvention of the old-school FPS; it kept the frantic pace and focus on movement, but tweaked things just enough to make the game feel truly fresh and not a rehash of old ideas. I used to play a lot of FPS games back in the day, but haven’t had a ton of interest in the genre in the last, oh, 20 years or so. DOOM 2016 rekindled that love I used to have for FPS games, and DOOM ETERNAL looks to take everything great about its predecessor and dial it up to 11. I can’t wait.

After the 2002 RESIDENT EVIL on the GameCube, 2019’s RESIDENT EVIL 2 remake had a high bar to clear, but much to my surprise – and delight – it managed to pass with flying colours. A remake of RE3 always seemed like a foregone conclusion, especially after the massive success of RE2, and with the hot streak Capcom are currently on, I’m very excited to see how it turns out.

I was not the biggest fan of the original RE3. I thought it had some novel ideas on how to evolve the formula, and I can appreciate its attempts to depict a more open outdoors environment (even if I don’t think it was very successful), but ultimately I didn’t like it nearly as much as the first two games. And that’s pretty much exactly why I’m quite excited for RESIDENT EVIL 3 – it’ll be the perfect opportunity to make good on those ideas, and iterate on the already excellent RE2 remake. 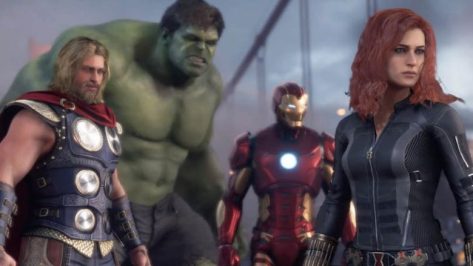 This is kind of a weird one. As a lifelong True Believer, and fan of licensed games in general, the relative drought of Marvel Comics-based console games in the past several years has been a bit of a bummer. So when Square Enix announced a couple of years ago that they had acquired the license to produce an AVENGERS game I was pretty excited! Then, in 2019…. it was unveiled. And, uh, it was not a pretty look.

The announcement of the game at E3 last year was really weird, SE spent a lot of time basically not really showing or explaining anything, people who got to see the game behind closed doors seemed to have little good to say, and dear lord, did it look dreadful. I still don’t like the way the game looks, but seeing more recently surfaced gameplay footage at least has me a little curious about what could be a pretty fun superhero romp. I’m still utterly confused as to how the single-player campaign/co-op live game divide is meant to work exactly, but, well, there could be something there.

Calling this a “top game I’m looking forward to” is probably a bit of a stretch, but between my hunger for a good Marvel game and the complete confusion over what this game is exactly, I’m at the very least eager to learn more. 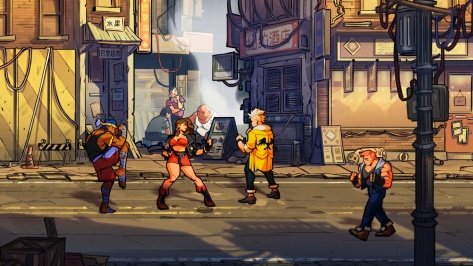 I have previously written about some of the concerns I have regarding STREETS OF RAGE 4. My thoughts on the game’s visual presentation haven’t really changed since the game’s announcement (short version: the art is very well executed, but in a style not entirely befitting the material), but after having the chance to get my hands on a demo version of the game at EGX 2019, I can confidently say that I’m a lot less worried and a lot more excited.

Even if it does hew a little closer to SOR2 than I would like in some ways, there really are a ton of small and large changes and additions to the gameplay mechanics which all add up to something that feels familiar and faithful, but still fresh. The demo I played also seemed to strongly suggest a traditionally linear, level-based structure with good pacing – a concept that almost all modern beat ’em ups seem to struggle with. I’m sure I will find things to complain about in the final game (inevitable for someone who’s spent the last 25 years imagining some version or another of SOR4, probably), but playing the demo made me feel comfortable trusting that STREETS OF RAGE 4 will be a fun game to play, and a worthy successor.

THE KING OF FIGHTERS XV

The KING OF FIGHTERS series has had a bit of a rocky last decade and change, with the once-annual series new getting new instalments once every five years or so. The quality has always been there though – KOFXIII was an incredible game, and despite being maligned for its 3D visuals, I really enjoyed KOFXIV as well.

As a long-time series fan I would be excited for a new KOF under any circumstances, but THE KING OF FIGHTERS XV feels unusually exciting for a few reasons – while XIV was a good game, it definitely had the feel of a developer getting their feet wet in a new style and development environment. I liked it, but it always felt like the real kicker would be to see how they would follow it up, once they’d grown more confident and achieved a more solid foundation to work from. Last year’s SAMURAI SHODOWN was a big step up visually (not to mention a good game all around), and has me eager to see what SNK will manage to cook up for their flagship series.

I may still have parts 3, 4, 5 and 6 to get through before I’m up to speed, but that doesn’t mean I can’t already be really excited for YAKUZA 7. The game will feature a brand new protagonist, greatly overhauled gameplay systems, and I’m sure many other exciting new things, too – but more than that I’m just thrilled to go on another adventure in Kamurocho. Ryu Ga Gotoku Studio consistently knock it out of the park with their characters, worlds, and stories, and have definitely grown to become one of my favourite developers over the past few years. They’ve earned my trust, and I’m in there day one no matter what.

It is my impression that most people who are aware of AGE OF BARBARIAN see it mostly as a joke. Which, you know, fair enough I guess – it’s got kind of goofy looking characters, and it’s definitely funny (intentionally or not) – but personally I genuinely love Crian Soft’s barbarian epic. AGE OF BARBARIAN is overflowing with an earnest love and appreciation of classic pulp and fantasy fiction with overt references to Howard and Frazetta left and right – in a way that you rarely if ever see in other games. It’s not exactly original in that sense, but it’s incredibly refreshing to see such an unabashedly indulgent style played completely straight, with zero sarcasm or tongue-in-cheek jokiness.

It’s this earnestness which is always at the forefront of Crian Soft’s games that makes me such a massive fan of their work, even if the games aren’t always the most polished. Having said that, AGE OF BARBARIAN does have an amazing atmosphere and is legitimately filled with incredible-looking locales, and even has pretty fun combat. For all these reasons and more, I am extremely excited to see what AGE OF BARBARIANS II will bring to the table in 2020.

Hell yes. We are getting not one but TWO exciting-looking new games from Crian Soft in 2020! METAL FURY 3000 trades AGE OF BARBARIAN’s Frazetta-style swords and sandals for a futuristic universe straight out of Heavy Metal Magazine, and I am so there for it. I absolutely love this shit, and I have a tremendous amount of respect and admiration towards Crian Soft for being essentially the standard-bearer for this type of aesthetic in modern video games. Pretty much everything I said about AGE OF BARBARIANS II applies here too – I reckon the game will be fun, but it’s really the aesthetic, tone and atmosphere that I’m here for.

DEADLY PREMONITION 2: A BLESSING IN DISGUISE

“FK” in the coffee. I knew I could count on it. It never fails!

Back in 2010 I had heard rumblings about RED SEEDS PROFILE (aka DEADLY PREMONITION) which caught my interest, and not content sitting around waiting for the eventual PAL release on Xbox 360, I actually imported the Hong Kong PS3 version. The extra trouble and money spent were well worth it though, as I absolutely fell in love with the game and considered it easily one of my favourites of that year.

With SWERY having seemingly moved on to other things in the years since, the unceremonious surprise announcement of DEADLY PREMONITION 2 during a Nintendo Direct broadcast caught me completely off guard – but I’m extremely ready to jump back into the shoes of Special Agent Francis York Morgan.

HUNTDOWN was featured on last year’s list, with the hope that it would eventually come out during 2019. Of course it ultimately didn’t – but I still really want to play it! Here’s hoping it finally makes its way to market (and into my hands) in 2020.