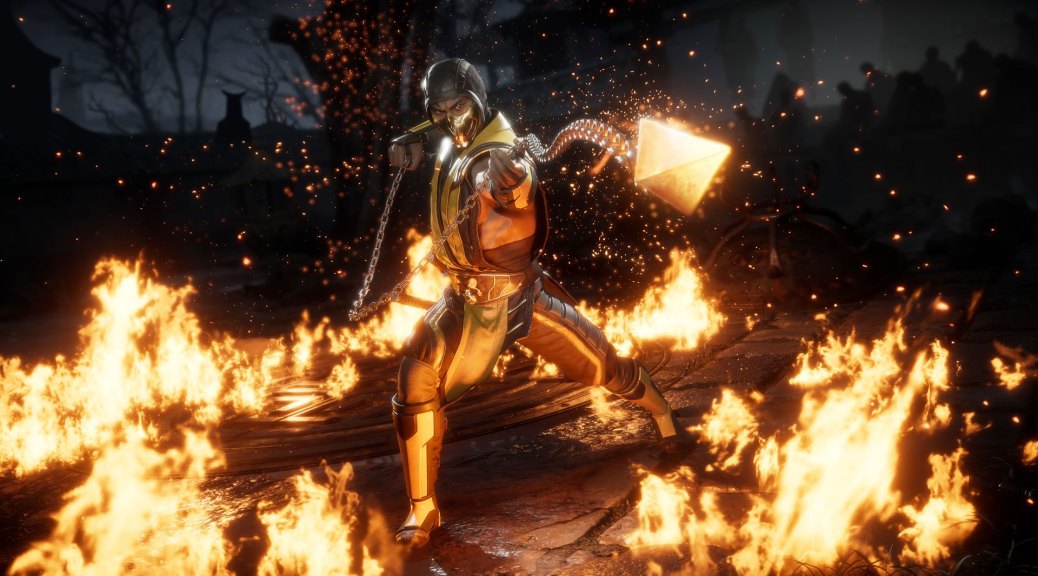 At The Game Awards a couple of weeks back, MORTAL KOMBAT 11 was announced to the world. As a long-time fan of the MK series, and especially the most recent instalments, the news that the latest incarnation is coming – and soon! – was great indeed. NRS are keeping things close to their chest as usual, so for now we don’t know a whole lot about MK11. So let’s recklessly speculate and express some wishful thinking, shall we?

First off, there’s been a number of supposed “leaks” surrounding certain details about the game, including the character roster, game modes, and whatever else, dating back to well before the game was officially (or even unofficially) announced.  So far though, I personally haven’t seen anything leaked that has since turned out to be true, or couldn’t reasonably be guessed – at this point all the “leaked” info I’ve seen has been conflicting with other “leaked” info, and/or been of the nature that we can’t know what’s accurate until it’s corroborated by official reveals. So long story short: I’m largely ignoring all “leaks” for the time being.

So what can we glean from what has been officially shown? The press release accompanying the announcement mentions a “time-bending” story – clearly hinted at in the announce trailer by the presence of a mysterious lady standing by a GIANT HOURGLASS which, by the way, seems to be running backwards. The appearance of two Scorpions in the trailer – the latter clearly patterned after his UMK3/MK4 look – would also seem to suggest that we may be getting multiple versions/timelines of characters in the story.

I’m excited to see what the time travel aspect will bring to the game. One of the gripes I had with MKX was that I wished it had taken more from the 3D era of Mortal Kombat, be it in terms of characters, arenas, storylines, or all of the above. I still wish for the same with MK11, but with time travel thrown into the mix, the doors are suddenly kind of open to just throw pretty much anything from any previous MK into the game. And why not? Similar to how the Multiverse gimmick provides an in-game explanation to mirror matches, alternate versions, DLC skins, etc in Injustice, time travel provides a fun and convenient (if not strictly needed) explanation for why MK1 Kano would fight MKX Cassie on the Falling Cliffs from MKD, or whatever. It also gives them the freedom to basically go as crazy as they want with the character roster.

As for which characters to expect in the game, aside from the not very helpful “well, potentially anyone, I guess”, I do think there are a number of  educated guesses we can make based on events in MKX. Of course, the cliffhanger setup for MK11 is that Liu Kang and Kitana have taken over as rulers of the Netherrealm, making their inclusion rather obvious. Having been introduced as kind of the next generation of Earthrealm heroes, I’d also expect at least some if not all four of the “Kombat Kids” (Cassie, Takeda, Kung Jin and Jacqui) to return as well. As for other newcomers, Erron Black was a novel (and highly popular) addition, so he’s probably back. Kotal Kahn and D’Vorah seem like they would likely have some story significance and be in for that reason, but who knows. Ferra/Torr’s story came to a conclusion in their ending, making their return perhaps less likely.

Although death has never been particularly permanent in the MK universe, the deaths of Quan Chi, Mileena and of course Shinnok were fairly significant plot points, so I don’t expect any of them back in 11. Ermac’s MKX ending hinted towards the return of Shang Tsung – not only is he a popular character, but with the villanous void left by the absence of Quan Chi and Shinnok (and pre-order bonus Shao Kahn presumably having little bearing on the plot), Shang Tsung’s inclusion would make a lot of sense. Another character hinted at in MKX’s endings is Kano’s son – it could end up kind of a non-sequitur like many past MK endings, but I certainly wouldn’t be shocked if he does show up in the next game.

My last bit of speculation on the roster, is that I somewhat expect MK11 to take a path similar to MK Deception. What I mean by that is, MK Deadly Alliance had a roster that was weighted pretty heavily in favour of characters from MK1, a few from MK2, and a large group of newcomers. Many characters from MK3 onwards were missing, to the chagrin of many fans. Once MK Deception rolled around, since the roster was not significantly larger than the previous game, most of the classic characters who were in MKDA sat out MKD – in favour of later-era characters like Nightwolf, Sindel, Ermac or Tanya, and older fan favourites like Jade and Noob/Smoke. While I personally really liked the roster in MKX, a lot of fans have voiced their disappointment with the lack of MK3+ era characters, so I think it would more or less follow tradition to see some classic characters sit out 11. Sonya, Johnny Cage, Jax and Kung Lao were all absent in Deception; this time they’d have even more of an excuse given the presence of their next-gen replacements. In any case, we’ll see! I’m sure NRS will have some curve balls for us, and I for one am greatly looking forward to being shocked, surprised, (and maybe even a little confused) by the final roster. For now, I’m excited to try out Shao Kahn and Liu Kang!

The last point of discussion has to be the mysterious “custom variation system” promised in the press release. Injustice 2 did something similar with its Gear system, allowing visual customization of characters, as well as upgrading stats and to a limited extent customizing move sets. The Gear system was arguably itself an evolution of the Variation system in MKX (which let you choose between 3 versions of every character, each with minor or major moveset differences), and one of many examples of NRS experimenting and iterating on gameplay features with each of their games. In my opinion, the Gear system was ultimately a failure, but that came down more to execution than the concept itself – so with a bit of iteration I’m still hopeful it could turn out great in MK11. The biggest problem I had with I2’s Gear system from a visual standpoint was that there simply was not enough meaningful change you could make to the character designs – you could collect 50 different “lower body” parts for Batman or Superman, but there wasn’t a single option for either of them to wear briefs outside their tights! For shame. Not only did this make the customization kind of limited and boring – it was also an awful substitute for Injustice 1’s multitude of cool, interesting and varied alternate costumes.

Additionally, I2 did a terrible job of implementing the “Gear Moves”, IE using the Gear system for moveset customization. By A) locking the Gear Moves behind a looong tedious grind for random loot drops, and B) failing to separate Gear Moves from the optional stat boosts on Gear, NRS essentially guaranteed from the get-go that noone in the competitive community would ever pay Gear Moves any attention whatsoever. A neat idea, but they really shot themselves in the foot with how it was executed.

So how could MK11 do better? Well, even from what little we’ve seen, in the announce trailer and accompanying first screenshots, we can already tell that Scorpion’s customization allows for more substantial change to his appearance than most characters in Injustice 2. I2 characters had a clear “base” outfit that each of the Gear bits were placed on top of – compare that to MK11 Scorpion, where there’s essentially not a single part of his costume which doesn’t change in one way or another. Hopefully this is representative of how they are handling the visual customization aspect – as this would allow them to still do full-on alternate costumes, but tie them into the system so that parts of different costumes can be mixed and matched, as opposed to letting you put one of 45 vaguely different pieces of ugly armour on top of a predetermined character design.

“Custom Variations”, or the new version of I2’s Gear Moves I think could be solved in a similarly straightforward fashion. Make sure that whatever options are available for a character are easy to set up in a tournament/competitive environment and not locked down behind long-term grinding, random drops, and perhaps most importantly, convoluted menu nonsense to set everything up. If slowly unlocking the availability of custom options has to be a thing, at least provide an alternate method separate from user accounts/progression that lets both players quickly and easily pick their preferred loadout in a local VS setting. Rock Band got it right – there’s a campaign mode where you work your way towards unlocking new songs as you go, and there’s a party mode where everything is just available, so you and your friends can have a good time! I’d love to see something similar in MKX; a dedicated “Competitive Mode” where every character, costume, customization option, Brutality, and whatever else is available, a simple password system or the like to pick your loadout – with the tradeoff that nothing that happens in this mode counts towards your account progression. Honestly it baffles me that so few fighting games even attempt stuff like this (kudos to Skull Girls for pioneering an Actual Useful “tournament mode”) – but I digress…

All in all, I think NRS just about nailed it with MKX – it is hands down my favourite MK game – and I am extremely excited to see what they’ve got in store for us next. Although Injustice 2 ended up being the first NRS game I didn’t like better than their previous (MKX was just that good), it was still a good game, a significant step forward in several ways, and not least a stepping stone towards MK11 becoming something even better. I really cannot wait for the MK11 Reveal event on January 17th – I’m sure I’ll have plenty more ramblings in store for y’all then. Stay tuned…

One thought on “Mortal Kombat Eleven”